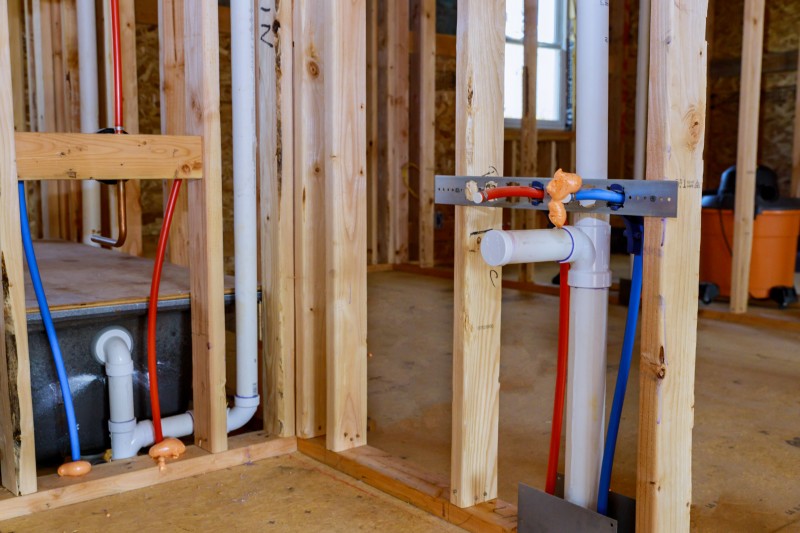 Prepare for the mechanical rough-in stage, and don’t worry if things don’t look like they’re progressing on the surface.

In the August Edition, we covered the ins and outs of what I refer to as the Honeymoon Phase of construction. Next up is a stage similar to a concept most everyone is familiar with: the Midlife Crisis. (Whether you’ve experienced one or not is an entirely different story.) It often comes with questions like, “What am I doing? Where am I going? What is the meaning of life?”

Likewise, the second phase of a home remodel, which I fondly refer to as the Midproject Crisis, is paired with parallel questions: What’s my contractor doing? Are we still moving forward as planned? Was this really all worth it? And of course: What is the meaning of life?

Fear not: Your contractor is working hard, your project is moving forward and, yes, your decision to renovate your home is, and will be, worth it. I can’t really speak about the meaning of life, but I can speak about the experiences of homeowners and remodelers during this period of a remodel.

Typically, once demolition and framing is finished (the Honeymoon Phase) and before sheetrock is put up, mechanicals will begin. (This probably is referred to as “mechanical rough-in” or “mechanical rough” by your contractor.) Mechanicals refer to the guts of the house: electrical; plumbing; and heating, venting and air conditioning (HVAC). Like our own guts, most of the work done during mechanicals occurs behind the scenes.

So what is going on behind the scenes? Let’s break it down by type of work.

Electrical. The groundwork for all new light fixtures, outlets, switches and appliances will be done during this phase. New wiring will be run in the walls and ceilings, electrical boxes will be installed for future fixtures, and electrical panels may be upgraded so they can handle heavier loads (this is especially prevalent in remodels where appliances are added). At this point, electricians are making sure that everything that will need power will have access to it and meet your municipality’s building code.

Plumbing. As with electrical, plumbing rough-in ensures that all plumbing fixtures, appliances and other water features will be supplied with water, gas (if your house uses natural gas) or both. So pipes may be moved or installed in new places, shower pans (the things that make sure the water stays in the shower) are installed and inspected, and gas lines may be moved, extended or even put in.

HVAC. Unlike electrical and plumbing, HVAC is the only mechanical where nearly all the work is completed during the rough-in stage. Pathways for new vents (for bath exhaust fans or kitchen vent hoods) are determined and vents are installed, air conditioning units may be replaced, and air return vents are located in appropriate positions.

All this sounds exciting, right? No doubt, it is. But the progress isn’t as visual as it is in the Honeymoon Phase. Since everything occurs behind walls, under foundation or in attics, the big “wow” just isn’t there like it is when everything is torn apart.

It’s around this time that I’ve often seen homeowners concerned about progress. Yes, plumbers are there, but where are the new sinks?
Why isn’t there a single light fixture installed yet?
Is the HVAC guy even working, or is he just taking a nap in the attic?

The other contributing factor to the crisis is the fact that any speed bumps that crop up during this phase take a bit more time to resolve.
Overall, the placement of existing framing is the biggest obstacle in mechanical rough-ins.

If your plans specify that there is going to be a can light in Location A, but Location A has a structural beam directly above it — no can do. Or say your architect has designated a toilet to be mounted on the wall instead of on the ground, but existing wall framing prevents this from being a viable option. Back to the drawing board. Or maybe your HVAC contractor needs to be able to provide ductwork to a new vent hood location in your kitchen, but there is no open attic space to place the ducts. Time to think through the alternatives.

Another obstacle, which is less common but should still be noted, is the condition of existing mechanicals. Any wiring, plumbing or venting that is found to be damaged, dangerous or just not up to par with your municipality’s building code will likely need to be remedied.

And don’t even get me started on inspections. If your job is permitted, inspections for mechanicals will occur during this stage. City building inspectors are well known for being thorough. If you don’t have everything just right (which ultimately is good, because they’re looking out for your safety), they will not hesitate to make your contractor fix the issue before any work can continue.

So we’re halfway there. What’s next? Is the light at the end of the remodeling tunnel finally visible?
When will your house start to look like a home again? What is the meaning of life? (I’ll tell you one last time — I can’t help with the meaning of life!)

But for more information on the next phase of a remodel, look for the next installment in this series in our October Edition: the Renewal of Vows.

"Love Satin Touch! They are professional, responsive and provide great value. I highly recommend them for any project and have told friends about them. Thank you again so much."

Project: Bathroom Remodel "We had a tight deadline to finish our bathroom in the basement. They assured us they could meet that deadline and they did with a few days…

Project: Basement Remodel "We had our basement remodeled by Satin Touch. We had a bedroom and seating area added, which we are happy with. We would recommend Satin Touch for…

Project: Bathroom Remodel; "Very helpful to an elderly lady.  They cleaned up the work area extremely well and explained every step of the job.  The price quoted at the very…

Project: Bathroom Remodel "We had a fabulous experience working with Satin Touch. We originally hired them for painting and door installations, but ended up needing them for a master bathroom…

Project: Framing "Satin was incredible to work with, their team was courteous and always on time when they said they would arrive, they always cleaned up after themselves and the…

Project: Kitchen Remodel "I was introduced to Satin Touch through the Home Advisor service, and I chose them over two other contractors to do a kitchen renovation and garage re-siding.…

Project: Exterior Stairwell, 2 Stories "They were able to design and build a challenging set of stairs with creativity and competence."

Project: Kitchen Remodel "From day one Mo set the pace with straight forward answers to our questions. He set a schedule and stuck to it despite several changes at our…

Project: Framing "Satin Touch was the best thing to happen to us and our basement finishing project.  I’ll recommend them to anyone I know."

"We had a great experience working with the Painting division and Jim Olson as our project manager. We were looking to have popcorn ceilings removed throughout the house and repainting…

Project: Kitchen Remodel "Last fall, my wife and I decided it was time to upgrade and update our 37-year-old kitchen. We did some research, found some qualified candidate companies, and…